Lords of the Underworld

All her life, Ashlyn Darrow has been tormented by voices from the past. To end the nightmare, she has come to Budapest seeking help from men rumored to have supernatural abilities, not knowing she'll be swept into the arms of Maddox, their most dangerous member--a man trapped in a hell of his own.

Neither can resist the instant hunger that calms their torments...and ignites an irresistible passion. But every heated touch and burning kiss

She has tempted many men...but never found her equal.

Though she has lived for centuries, Anya, goddess of anarchy, has never known pleasure. Until Lucien, the incarnation of death--a warrior eternally doomed to take souls to the hereafter. He draws her like no other. And Anya will risk anything to have him.

But when the merciless Lord of the Underworld is ordered by the gods to claim Anya herself, their uncontrollable 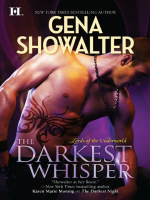 4) The darkest whisper
Author:
Showalter, Gena.
Formats:
Book, OverDrive eBook
Choose a Format
+ Book
Show Edition
On Shelf
2nd Floor- Adult Books
ROMANCE SHOWALTE G.
Place Hold
+ OverDrive eBook
Show Edition
Checked Out
Quick Copy View
See Full Copy Details
Place Hold OverDrive
Description:
Click to view
"Bound by the demon of Doubt, Sabin unintentionally destroys even the most confident of lovers. So the immortal warrior spends his time on the battlefield instead of the bedroom, victory his only concern...until he meets Gwendolyn the Timid. One taste of the beautiful redhead, and he craves more. Gwen, an immortal herself, always thought she'd fall for a kind human who wouldn't rouse her darker side. But when Sabin frees her from prison, battling...
More Info
SHARE 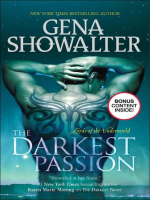 5) The darkest passion
Author:
Showalter, Gena.
Formats:
Book, OverDrive eBook
Choose a Format
+ Book
Show Edition
On Shelf
2nd Floor- Adult Books
ROMANCE SHOWALTE G.
Place Hold
+ OverDrive eBook
Show Edition
Available Online
2 copies, 1 person is on the wait list.
Online OverDrive Collection
Online OverDrive Collection has 2
Check Out OverDrive
Description:
Click to view
For weeks, the immortal warrior Aeron has sensed an invisible female presence. An angel--demon-assassin--has been sent to kill him. Or has she? Olivia claims she fell from the heavens, giving up immortality because she couldn't bear to harm him. But trusting--and falling for--Olivia will endanger them all. So how has this mortal with the huge blue eyes already unleashed Aeron's darkest passion?--P. [4] of cover.
More Info
SHARE 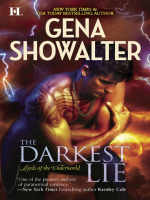 Keeper of the demon of Secrets, Amun can manipulate the darkest thoughts of anyone nearby. But when the immortal warrior is chained and isolated to protect those he loves, death is his only hope of release--until he meets Haidee, a fellow prisoner whose beauty and hidden vulnerability draw him into a reckless test of his loyalty....

Haidee is a demon-assassin, raised to despise Amun's kind. Yet how can she hate the man whose touch sets...
More Info
SHARE 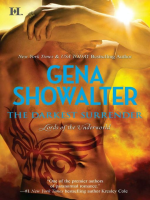 8) The darkest surrender
Author:
Showalter, Gena.
Formats:
Book, Cloud Library eBook, OverDrive eBook
Choose a Format
+ Book
Show Edition
On Shelf
2nd Floor- Adult Books
ROMANCE SHOWALTE G.
Place Hold
+ Cloud Library eBook
Show Edition
Available Online
Access Online
+ OverDrive eBook
Show Edition
Available Online
Online OverDrive Collection
Online OverDrive Collection
Check Out OverDrive
Description:
Click to view
Until Kaia, an enchanting Harpy, tempts him to the razor's edge of surrender. Known among her people as The Disappointment, Kaia must bring home the gold in the Harpy Games or die. Strider is a distraction she can't afford because he has an agenda of his own--steal first prize, an ancient godly artifact, before the winner can be named. But as the competition heats up, only one prize will matter--the love neither had thought possible.
More Info
SHARE 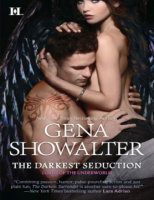 10) The darkest craving
Author:
Showalter, Gena.
Formats:
Book, Axis 360 eBook
Choose a Format
+ Book
Show Edition
On Shelf
2nd Floor- Adult Books
ROMANCE SHOWALTER G.
Place Hold
+ Axis 360 eBook
Show Edition
Available Online
Axis 360
Access Online
Description:
Click to view
Having endured weeks of torture in the bowels of hell, Kane wants nothing to do with his beautiful rescuer, Josephina Aisling. The half Fae female threatens to awaken the demon of Disaster inside him, a beast he has determined to kill, no matter the price. Josephina is hunted by a brutal enemy -- her royal family -- and Kane is her only source of protection. He is also the only male to ever set her aflame and even he succumbs to the heat. But as...
More Info
SHARE 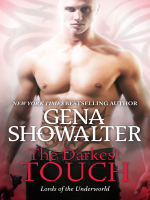 13) The darkest promise
Author:
Showalter, Gena.
Formats:
Book, Axis 360 eBook, Hoopla eAudiobook, Hoopla eBook
Choose a Format
+ Book
Show Edition
On Shelf
2nd Floor- Adult Books
ROMANCE SHOWALTER G.
Place Hold
+ Axis 360 eBook
Show Edition
Available Online
Axis 360
Access Online
+ Hoopla eAudiobook
Show Edition
Available Online
Online Hoopla Collection
Check Out Hoopla
+ Hoopla eBook
Show Edition
Available Online
Online Hoopla Collection
Check Out Hoopla
Description:
Click to view
"Possessed by the demon of Misery, Cameo isn't allowed to experience joy. If she dares, her memory is wiped clean. With no other recourse, she sneaks into a land more fantastical than any fairy tale, determined to find the one man with the key to her redemption. Lazarus the Cruel and Unusual rules his kingdom with a single unwavering focus: to build his army and annihilate his enemies. Nothing distracts him-- until Cameo. He is relentless in his quest...
More Info
SHARE 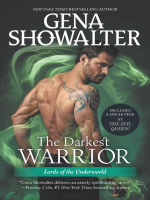 14) The darkest warrior
Author:
Showalter, Gena.
Formats:
Book, Hoopla eAudiobook
Choose a Format
+ Book
Show Edition
On Shelf
2nd Floor- Adult Books
ROMANCE SHOWALTER G.
Place Hold
+ Hoopla eAudiobook
Show Edition
Available Online
Online Hoopla Collection
Check Out Hoopla
Description:
Click to view
"Puck the Undefeated, host of the demon of Indifference, cannot experience emotion without punishment, so he allows himself to feel nothing. Until her. According to ancient prophecy, she is the key to avenging his past, saving his realm and ruling as king. All he must do? Steal her from the man she loves--and marry her. Gillian Shaw has suffered many tragedies in her too-short life, but nothing could have prepared the fragile human for her transition...
More Info
SHARE

15)  The darkest king , Lords of the Underworld 15.
Author:
Showalter, Gena
Choose a Format
The library does not own any copies of this title. 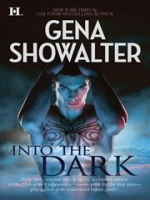 16) Into the Dark: the Darkest Fire\The Amazon's Curse\The Darkest Prison
Author:
Showalter, Gena.
Choose a Format
+ Hoopla eBook
Show Edition
Available Online
Online Hoopla Collection
Check Out Hoopla
Description:
Click to view
Three otherworldly tales from the master of paranormal romance and a Lords of the Underworld bonus guide! THE DARKEST FIRE. A Lords of the Underworld prequel. Geryon is the guardian of hell, more monster than man. Kadence is the goddess of Oppression, more angel than woman. Together they will enter the flames to battle a dangerous horde of demon lords and discover a passion unlike any other. THE AMAZON'S CURSE. A tale of Atlantis Zane, a fierce vampire...
More Info
SHARE

17)  After dark , Lords of the Underworld Related work.
Author:
Showalter, Gena
Choose a Format
The library does not own any copies of this title.
CONNECT WITH US