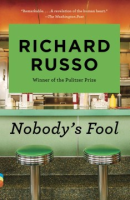 Description
In 1750, without warning or apparent reason, the mineral springs of the colonial resort town of Bath, New York, ran dry. A little more than two hundred years later, after numerous warnings and for too many reasons, Sully, the unluckiest man in this unlucky town, isn't doing too hot either. He's broke, out of a job, and the owner of a dead pickup truck. The good news? Sully has the dumbest man in North Bath as his devoted friend, a long-suffering, long-married woman who loves him, a forgiving eighty-year-old landlady who converses with her late husband, a spastic doberman as a watchdog, and the finest one-legged drunken Jewish lawyer this side of Albany. Now, if Sully could only banish his father's slyly grinning ghost and earn his own son's respect, he might just turn the whole damn thing around.
Nobody's Fool is a funny, roguish novel that captures the imagination and provides a rich journey into a special world peopled by characters so real, so vital, we feel we've known them all our lives. As he did with his critically acclaimed Mohawk and The Risk Pool, Richard Russo brilliantly invents an unforgettable and luminously magical time and place. And, in doing so, Russo secures his place among America's great writers and most captivating storytellers.
Also in This Series