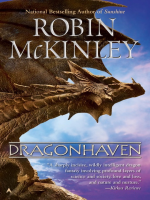 Description
Jake Mendoza lives at the Makepeace Institute of Integrated Dragon Studies in Smokehill National Park. Smokehill is home to about two hundred of the few remaining draco australiensis, which is extinct in the wild. Keeping a preserve for dragons is controversial: detractors say dragons are extremely dangerous and unjustifiably expensive to keep and should be destroyed. Environmentalists and friends say there are no records of them eating humans and they are a unique example of specialist evolution and must be protected. But they are up to eighty feet long and breathe fire.

On his first overnight solo trek, Jake finds a dragon?a dragon dying next to the human she killed. Jake realizes this news could destroy Smokehill? even though the dead man is clearly a poacher who had attacked the dragon first, that fact will be lost in the outcry against dragons.

But then Jake is struck by something more urgent?he sees that the dragon has just given birth, and one of the babies is still alive. What he decides to do will determine not only their futures, but the future of Smokehill itself.